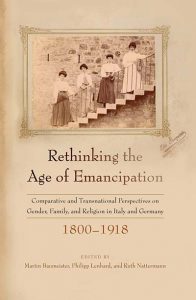 Since the end of the nineteenth century, traditional historiography has emphasized the similarities between Italy and Germany as “late nations”, including the parallel roles of “great men” such as Bismarck and Cavour. Rethinking the Age of Emancipation aims at a critical reassessment of the development of these two “late” nations from a new and transnational perspective. Essays by an international and interdisciplinary group of scholars examine the discursive relationships among nationalism, war, and emancipation as well as the ambiguous roles of historical protagonists with competing national, political, and religious loyalties.

Martin Baumeister is Director of the German Historical Institute in Rome.

Philipp Lenhard is Assistant Professor at the Institute of Jewish History and Culture at the Ludwig-Maximilians-University in Munich.

Ruth Nattermann is Assistant Professor at the Department of European History at the Ludwig-Maximilians-University in Munich. She has been principal investigator of the international DFG-network of scholars “Gender – Nation – Emancipation”.